Read below for an excerpt from The Exiled Jeweler, Book 2 in the Rosa Legacy series. You can purchase it on Amazon for Kindle and paperback. Or read it for free with your Kindle Unlimited subscription. 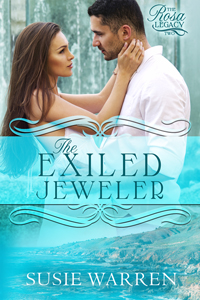 Alex observed the expressions fleeting across Emilia’s face as she acknowledged him. Her shoulders straightened and she turned a pale, set-in-stone face toward him. She had been so elusive that it had been impossible to make contact with her. But making a bid for Berceto had brought her out of hiding.
The elusive heiress said something to her father. Emilia Berceto held her father in the palm of her hand. But handing her the company on a silver platter was beyond her father’s ability at this point. Berceto would be lucky if they were in business in six months.
She had refused any contact with him after that night, which still rankled him. Her parents had shipped her off to parts unknown. He would have insisted on protecting her and suing the tabloids.
He could feel his chest tighten as he remembered her spell. At the gala, he could barely keep his eyes off of her. She tempted him in a way that no other woman had and then left without a backward glance.
But he had made a mistake with her. He hadn’t known how sheltered and out of her element she had been. She had been kept hidden from view and overly protected so the press didn’t even have her on their radar. He had been shocked when he found out several days later that their moment of passion had been caught on film.
Now the Berceto Empire was rumored to be short on cash and hurting for sales. The surprising element in all of this was that Emilia, instead of being merely a spoiled rich kid, possessed a hidden talent for design and the determination to succeed in her own right.
Alex stepped closer and shook her father’s hand before turning his gaze on her.
“Emilia.” He let gaze rake over her and noticed she took a slight step back.
Her face was exquisite with the barest application of makeup. She no longer had shoulder-length brown hair; instead it had been replaced with shocking red hair reaching her mid-back. He noticed her slim build and the feminine shape of her hips and breasts. She had lost some of her shyness but still seemed self-contained and elusive.
Peter Berceto said, “I didn’t realize the two of you had met before.”
She held his gaze. “We haven’t officially.”
“Alexander Armati, I would like to introduce my daughter, Emilia Berceto.”
She held out her graceful hand. “It’s a pleasure to meet you, Mr. Armati.”
Alex could feel an awareness pass through him as he felt the touch of her hand. Banishing the memory of their past encounter from his mind to stay focused.
“Alex, please.”
The maître d’ seated them in the glassed-in patio area and placed a wine menu on the table. Peter Berceto excused himself to call his brother.
Glancing at the menu, he ordered a bottle of chardonnay for the table. The server nodded politely and moved away.
Meeting her gaze, he said, “You and I have unfinished business.”
Emilia sat up straighter, twisting the cloth napkin in her hands. “I don’t want to talk about the past. My only concern is the future of Berceto Designs.”
He didn’t understand her avoidance. He had thought about her for months and months after their brief encounter. But she had refused every one of his calls. “Does your family know that I was the man in the photographs captured in the garden?”